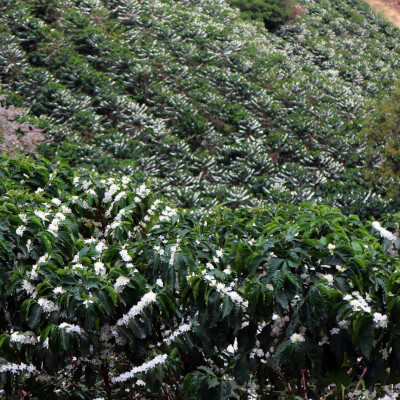 Available In The Following Markets

Santa Barbara Estate is composed of 5 sister farms that lie across three neighbouring, geographical regions - Santa Barbara, Fredonia and Amagá. Established in the 1980s, from the beginning Sr. Pedro Echavarria knew that location was crucial. Attracted by diverse microclimates, singular volcanic soils, perfect altitude and a tradition of excellence in coffee production, he established a small farm in the high Andes of Antioquia – Finca San Pascual. By marrying these perfect natural conditions with hard work and efficiency, he quickly grew both the area under cultivation and the farm’s reputation.

In the last five years, Pedro’s son – also Pedro – has become more deeply involved in the workings of the Estate’s farms, taking the already high quality of the coffee to new heights through experimentation in processing and increased monitoring and control of every stage of production. Pedro Jr. and Santa Barbara’s Coffee Director, Leonardo Henao Triana, approach the processing of their coffees with blend of art, industrial rigor and scientific curiosity. Today, in addition to providing a prime location for experimental new plantings of Castillo, Colombia, Bourbon, Typica and Tabi, San Pascual functions as the research lab where all their new processing methods are trialed.

The family always keeps a donkey named ‘Pascual’ on the premises as a sort of ‘mascot’ for the farm.

The wet mill in San Pascual was the location where Santa Barbara’s innovative Cold Fermentation process was developed, and about a few years ago Santa Barbara’s Coffee Team began experimenting with processing small lots using the natural method. After being hand harvested and sorted, Santa Barbara dries these coffees first in raised beds under shade. The coffee is spread thinly on screens encased in wooden boxes and is regularly turned to ensure even drying. Next, the coffee cherry is moved out into the sunlight for 3 days until it contains the correct level of moisture; before being moved into the silo for another 48-72 hours to rest.

Due to the success of the natural experiments at San Pascual, Pedro has recently expanded their operation. All Natural processing has now been moved to AguaLinda (one of Santa Barbara Estates 5 sister farms). The family named the highest farm in the estate Agualinda because of the many water sources and creeks found in the property. Agualinda, due to its altitude, has a beautiful view over the Sabaletas canyon, which is why business meetings are always conducted at the main house. The farm has a new dormitory for pickers and a renovated main house that is around 150 years old. Here, quality coffees are brought from all 5 of the Santa Barbara farms to be naturally processed; whereas their washed coffees are taken to La Joyeria, the farm’s primary wet mill, and its production is kept separate from the other farms.

Santa Bárbara Estate employs 60 people all year round, who on average earn 30% above the minimum wage. Half of these also receive free housing within the farm for themselves and their families. A further 1,200 pickers are hired during the main harvest, comprised mainly of farmers from around the Santa Bárbara Estate who pick coffee to supplement their income. Workers are generally long-term employees and have been with the company for more than 10 years.