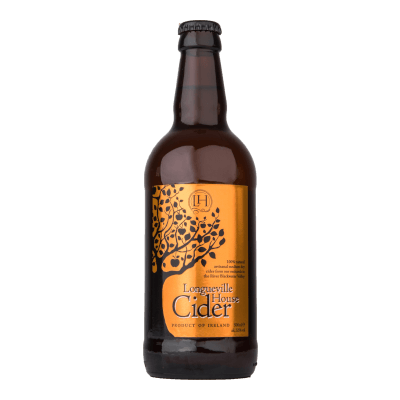 Our crop of Dabinett and Michelin apples are harvested in late October, once picked the apples are crushed and pressed in the Cider Mill on the estate. The pressed juice is naturally fermented, taking place as a result of the action of the wild yeasts, which are particular to the orchards and environs of Longueville. Fermentation takes between 2 and 6 months resulting in a rich, amber colored cider, full of character, flavour and taste. There are no added coloring's, additives, sulphites or preservatives used at any stage during the production and manufacturing process of the cider's. The entire process from growing the apples to the fermentation of the cider is done on the farm.

The cider is then bottled in 500ml glass and sold as Longueville House Cider (ABV 5.5%). A medium-dry cider with a fresh apple flavour, Longueville House Cider is a gorgeously refreshing, clean, crisp cider - and as far from commercially produced ‘cider’ as can be imagined (its how traditional cider used to be before it got all artificial and fake)..
Shelf Life: 3 Years
Dairy Free Gluten Free Nut Free Wheat Free Vegetarian Vegan
← Back To Longueville House Beverages
© 2020 — NeighbourFood. All Rights Reserved.
Markets How It Works Become A Producer Become A Host
Basket 0 Sign-In Join Now
Version: 20191219.1
Environment: ProductionIE
Process Id: 5160