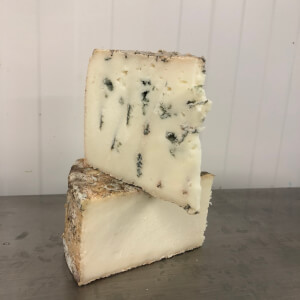 Michael and Jenny Finegan established Boyne Valley Farmhouse Cheese in 2010 on the family farm in Co. Meath. They milk 250 goats which provides the milk for their cheese.

Boyne Valley Blue is mild to medium in flavour. It is semi soft in texture and has a natural rind. It is pasteurised. Fantastic melted on pizza, on a burger or just with crackers and chutney.

In 2016 a 200 year old stone building on the farm was converted in to a cheesemaking facility. A new cheese was developed. Boyne Valley Bán is a white goats cheese similar in style to the French Tomme cheese. In 2018 Boyne Valley Bán won gold and ‘Best Irish Cheese’ in the British Cheese Awards, received 3 stars and was nominated for a ‘Golden Fork’ award in the Great Taste Awards.

‘Boyne Valley Bán’ is the new cheese made by boyne valley farmhouse cheese. This cheese is a semi-hard pasteurised white goats cheese. At 2 – 3 months old the rind will be dry and white from mould. Tasting notes: The maturing process takes two or more months, producing a cheese with a rustic appearance — a thick, sometimes fuzzy, grey rind. The pâté can be a buttery color, or so pale that it is virtually white. It can have some small eyes, and smells and tastes earthy like a cave. Boyne Valley Bán is mild and creamy, fruity and nutty, but it's also a robust cheese with overtones of salt. Pair it with sausages, fruit, bread, and wine. 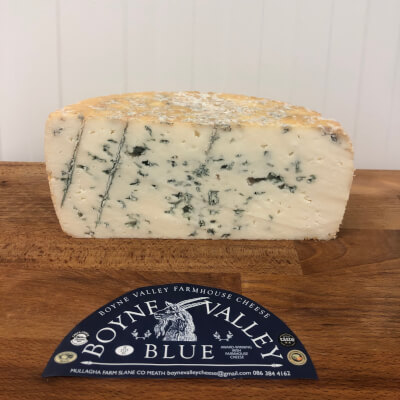